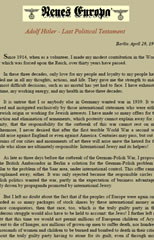 Berlin April 29, 1945. Since 1914, when as a volunteer, I made my modest contribution in the World War which was forced upon the Reich, over thirty years have passed. In these three decades, only love for my people and loyalty to my people have guided me in all my thoughts, actions, and life. They gave me the strength to make the most difficult decisions, such as no mortal has yet had to face. I have exhausted my time, my working energy, and my health in these three decades. It is untrue that I or anybody else in Germany wanted war in 1939. It was desired and instigated exclusively by those international statesmen who were either of Jewish origin or working for Jewish interests. I have made so many offers for the reduction and elimination of armaments, which posterity cannot explain away for all eternity, that the responsibility for the outbreak of this war cannot rest on me. Furthermore, I never desired that after the first terrible World War a second war should arise against England or even against America. Centuries may pass, but out of the ruins of our cities and monuments of art there will arise anew the hatred for the people who alone are ultimately responsible: International Jewry and its helpers ! ...