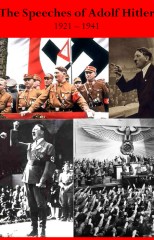 Munich, Gathering of the SA - Speech of November 9, 1921. On November 9, 1921 - just five days after the Battle of the Hall (Saalschlacht) where fewer than fifty SA Men had beaten back more than 400 communists and Jews who had tried to disrupt Hitler's speech in the Festival Hall of the Hofbrauhaus--Adolf Hitler addressed a gathering of SA Men. The following is what he told them: For us there are only two possibilities: either we remain German or we come under the thumb of the Jews. This latter must not occur; even if we are small, we are a force. A well-organized group can conquer a strong enemy. If you stick close together and keep bringing in new people, we will be victorious over the Jews. ...