Hitler Adolf - Why we are antisemites 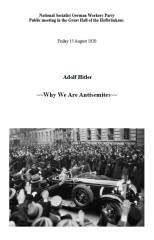 Author : Hitler Adolf
Title : Why we are antisemites
Year : 1920

My dear countrymen and women! We are quite used to being generally referred to as monsters. And we are considered particularly monstrous because, in a question that certain gentlemen in Germany are nervous about, we are marching at the head – namely in the question of the opposition to the Jews. Our people understand many things but this one problem nobody wants to understand, and in particular because, as a worker explained: “What connection is there at all between the workers and the Jewish Problem, when in reality most of the people have no idea what this problem means.” Most people let themselves be guided by feelings and say: “I have seen good and bad people among them, just like among ourselves.” Very few have learned to view the problem free of emotion, in its clean form. I will at once begin with the word “work”. What does it mean – work? Work is an activity performed not of one’s free will, but for the sake of one’s fellowmen. If there is a difference between man and animals, so it is particularly regarding work, which does not originate in an instinct but comes from an understanding of a necessity. Hardly any revolution had so deep an effect as the slow one which gradually transformed the lazy man of primeval time into the man who works. Talking of work, we can assume that this activity followed these three phases: First, it was an effect of a simple instinct of self-preservation which we also see in animals. Later, it developed into the second form of work – the one from pure egoism. Also this form became gradually replaced by the third: Work out of ethical sense of duty, where an individual does not work because he is forced to it. We see it at every turn. Millions of people work without being constantly forced to it. Thousands of intellectuals are sometimes bound to their studies for whole nights on end, day after day, although they may not do it for material gains. The hundreds of thousands of German workers after the end of their work tend their gardens. And, generally, we see today that millions of people cannot imagine living without some sort of occupation. When I said that this process represents a slow but perhaps also the greatest of all revolutions in human history, then one must assume that also this revolution had to have a cause, and this cause was the greatest Goddess of this Earth, the one who is able to whip men to the uttermost – the Goddess of Hardship. We can see this hardship in early prehistory, above all in the northern part of the world, in those enormous ice deserts where only the meagrest existence was possible. Here, men were forced to fight for their existence, for things which were, in the smiling South, available without work, and in abundance. In those times man made perhaps his first groundbreaking discovery: In those cold stretches man was forced to find a substitute for the only gift of Heaven which makes life possible – the Sun. And the man who produced the first artificial sparks later appeared to Humanity as a god – Prometheus, the fire-bringer. The North forced men to further activity – production of clothes, building of abodes. First, it was simple caves, later huts and houses. In short, he created a principle, the principle of work. Life would not have been possible without it. Although work was still simple, it had already to be planned beforehand and each individual knew that if he has not done his part, he will die of hunger in the coming winter. At the same time another development followed – the terrible hardship became a means for breeding of a race. Whoever was weak or sickly could not survive the terrible winter period and died prematurely. What remained was a race of strong and healthy giants. Yet another trait of this race was born. Where man is externally muzzled, where his radius of action is limited, he begins to develop internally. Externally limited, internally he becomes unlimited. The more man, due to external forces, must depend on himself, the deeper internal life he develops and the more he turns inward. ...