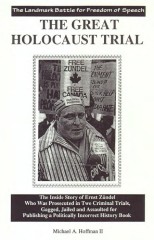 How is it that a man whose entire reason for being is one of love for his own kind (the root of the word kindness), and who sacrificed a lucrative graphic arts career and advertising business handling six figure accounts and earning a reputation conceded even by his enemies as a master of his art -who sacrificed all of this for love of his people-is libeled M a man of hate? How is it that a young German immigrant takes on the entire Canadian Establishment in a trial that was supposed to be a walkover for the System's media hoax, and rocks the world with shocking revelations of fraud, cover-up, massive impostures and confessions from the leading Extenninationist academics and "survivors" totally subversive of their bizarre gas chamber cult ? ...