Horthy Miklós - A life for Hungary 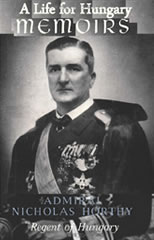 Foreword. by Andrew L. Simon, Professor Emeritus, The University of Akron It is a sure sign of respectability if one is routinely vilified for 80 years by the Communists and for 60 years by the Nazis. Without the opportunity for rebuttal, a fiction repeated often enough, will become ‘self evident truth’. Goebbels knew this, so did Beneš, two of the 20th century’s master propagandists. When Admiral Nicholas Horthy, Regent of Hungary for a quarter of a century, was re-buried in his family’s cript in September of 1993, there was an international uproar in the media. The Economist wrote about ‘Hungary’s shameful past’. The New York Times served up a dire warning about the return of Fascism, the Frankfurter Allgemeine ‘would rather forget it’, the Brazilian Veja commented that ‘Hungary honors a Nazi’. There is no end to the list. One sane opinion appeared in The Financial Times: ‘western historiography was interested exclusively in his alliance with Hitler, and the Communists characterized the anti-Bolshevik as a monster’. Admiral Horthy, privy to the domestic policies of the Habsburg empire at the highest level, naval hero, last commandant of the Austro-Hungarian Navy, Regent of a destroyed country that he led into relative prosperity against great odds, an anti-Bolshevik, a prisoner of the Nazis, was indisputably a statesman. Under his rule, to quote Columbia University history professor Istv<n De<k, “Hungary … was an island in the heart of Europe where a semblance of the rule of law and a pluralistic society had been preserved in a sea of barbarism”. Having traveled the world while in the navy, speaking six languages (Hungarian, Croat, Italian, German, French, English), serving as aide-de-camp of Emperor Francis Joseph, he had a solid background for his position. Horthy was not a narrow-minded Nationalist but a patriot who greatly preferred the multi-ethic, multi-religious, multi-lingual diversity of the Monarchy in which he grew up and had an admirable career, even as a Hungarian Protestant in a Austrian Catholic “regime.” Above all, he was a gentleman in the old, true sense of the word. His intimate knowledge of the politics of Central Europe during a time that led from the heights of the cultured, law-abiding, modernizing, developing age of the Monarchy to the depths of the Communist reigns of terror throughout the region makes his Memoirs an interesting, informative reading. ...