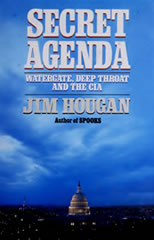 In the early morning hours of June 17, 1972, five men were arrested in the Watergate headquarters of the Democratic National Committee. Wearing business suits and surgical gloves, they were in possession of bugging devices and photographic equipment. One of the most important political events in American history, the Watergate affair, came to a dramatic end in 1974 with the resignation in disgrace of President Richard M. Nixon. Ten years later, investigative journalist Jim Hougan, reiving upon thousands of pages of formerly secret FBI and CIA documents, police vice squad reports and interviews with White House officials, Cabinet members, landladies, secretaries, security guards - at least a hundred in all - has come to startling conclusions about what reallv happened at the Watergate and. asks questions never before posed. ...