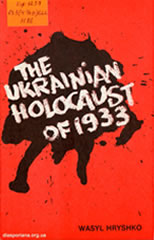 Preface. This book appears at a time when millions of Ukrainians in the diaspora are freely commemorating - and many more millions of Ukrainians are doing so secretly - the fiftieth anniversary of the genocide perpetrated by the Communist regime in Ukraine in 1933. This act of genocide was accomplished in the form of a great famine, artificially created by the Soviet government and accompanied by anti-Ukrainian terror under the slogan of the "struggle against Ukrainian nationalism." More than six million Ukrainians perished as victims of this unprecedented crime. On the anniversary of this great crime against humanity, thorough studies of this subject are being written. There is no doubt that they will be major contributions in revealing the truth that was so successfully concealed by the perpetrators. Before these books become available, interested readers will find the essential information in this book, written especially for the fiftieth anniversary of the Ukrainian tragedy of 1933. ...