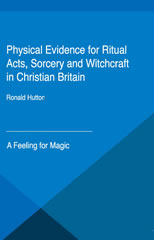 Introduction. Ronald Hutton. This book is affectionately dedicated to the memory of Ralph Merrifield, an archaeologist and museum curator who specialised mainly in the study of Roman London. In 1987, when he was in retirement, he published a book entitled The Archaeology of Ritual and Magic , which surveyed the evidence for ritual deposits of material in the historic period, mostly in England but with material drawn from all over Britain with comparative examples from Ireland and Continental Europe. More than half of its contents were concerned with the pagan Roman and Anglo-Saxon period, but what made the work remarkable was that it continued to consider deposits from the succeeding, Christian centuries, and to treat them in much the same way. It found evidence for the continuation of the ritual placement of the same kinds of object – animals (whole or represented by parts or single bones), pottery, garments and metal artefacts – in much the same contexts as in ancient times and seemingly in much the same manner. Merrifield did not suggest that the accompanying belief system had remained unchanged: indeed he acknowledged that it would have altered dramatically between different periods. Nonetheless, the basic form of rite seemed to him to have been essentially unaltered, even if acts which in pre-Christian cultures would have been part of an overarching religious system had turned into what usually seemed to have been simple acts of symbolic protection against misfortune or magical attack – Merrifield defining magic in this context as the attempted manipulation of uncanny power by human beings, for their own purposes. He was expert in the medieval and early modern texts of high ritual magic, and understood its symbolic code of astrological correspondences and Hebrew divine names, so that he was well equipped to spot references to this code when they occurred on material objects. The result was a major pioneering study, designed explicitly to alert archaeologists, and scholars in other disciplines, to the importance of recognising, preserving and studying what seemed to be ritual deposits from any period, and of making linkages between those from different ages. ...