Irving David - Churchill's War I The Struggle for Power 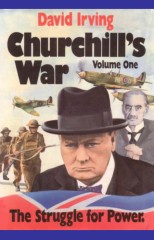 Introduction. Winston Churchill trod carefully into the middle of the second floor clubroom and paused, deliberately surveying the dozen faces that had turned toward him. As he stood there, short and squat, in a tuxedo that had seen long and honourable service, it occurred to him that he was probably a quarter century older than any of them. Hosting this dinner at the Union Club in New York City was Henry R. Luce, publisher of the magazines Time, Life and Fortune. It was March 14, 1946: the uneasy interlude after the end of World War Two had ended, and everybody could sense it. Luces fellow editors and executives scrutinised the famous Englishman as if taken aback to find him so small, in the way that movie fans are startled to find that their idols are less than the twenty-foot giants of the silver screen. In the words of a lucid and penetrating memorandum that Charles Murphy wrote for Luces private files, there was just a dress-shirted cave where the chest should have been, and a swelling paunch that bore testimony to years of rich fare. Henry Luce, who had brought him in, turned to greet his other guests. As Churchill swayed alone and splendidly in mid-room, the image struck Murphy of the Cunard Lines Queen Mary at the moment when she cast off her tugs in Southampton Water  heavy and loggy, drifting as the Solents current pressed her hull until her screws bit water and she forged ahead again. With soft rolls of flesh linking his head and body he looked to Murphy like a congenial, well-adjusted bullfrog. The frogs arms and legs were short and stubby, the hands small-boned and white. The complexion was pasty. Then Churchills expressionless and bloodshot eyes fastened on a portrait on the far wall. The liners screws began to thump and churn, he swayed across the clubroom and challenged: Whos that blighter? Luce guessed from the portraits dress that it was an eighteenthcentury Englishman; with the smug certainty of Charles Lambs wary connoisseur, he confirmed it by a glance at the brass nameplate and pronounced: William the Fourth. That it was that blundering and inept monarch took Churchill by surprise. He harrumphed, and said: Looks more like Lord Rosebery to me. Same heavy jowls. Behind them was a brooding sculpture of a bald eagle, carved in clear ice some hours earlier by the Union Clubs chefs. The wings of this symbol of American might were outstretched; its eyes glittered, and every crevice was heaped with black caviar. The clubs heating had been turned up, and rivers of iced water dribbled down its chest. Churchill leered. The eagle, he announced, seems to have caught a cold. He was hypnotised less by the sculptors art than by the caviar. He waved aside the genteel slices of dry toast an editor handed him, exclaimed: This stuff needs no reinforcement, and put words into action by shovelling a whopping helping onto a plate, and from there, with scarcely a perceptible interruption, straight and undiluted to his mouth  seemingly unabashed at the appreciative belches that shortly emerged from that orifice. I hope, gentlemen, he apologised with little evidence of true contrition, I hope you dont find me too explosive an animal. Luce misinterpreted the remark. On the contrary, Sir, he said, you were only putting into words what was gravely in the minds of many Americans. ...