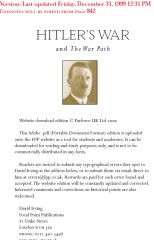 To historians is granted a talent that even the gods are denied – to alter what has already happened!’ I bore this scornful saying in mind when I embarked on this study of Adolf Hitler’s twelve years of absolute power. I saw myself as a stone cleaner – less concerned with architectural appraisal than with scrubbing years of grime and discoloration from the facade of a silent and forbidding monument. I set out to describe events from behind the Führer’s desk, seeing each episode through his eyes. The technique necessarily narrows the field of view, but it does help to explain decisions that are otherwise inexplicable. Nobody that I knew of had attempted this before, but it seemed worth the effort: after all, Hitler’s war left forty million dead and caused all of Europe and half of Asia to be wasted by fire and explosives; it destroyed Hitler’s ‘Third Reich,’ bankrupted Britain and lost her the Empire, and it brought lasting disorder to the world’s affairs; it saw the entrenchment of communism in one continent, and its emergence in another. In earlier books I had relied on the primary records of the period rather than published literature, which contained too many pitfalls for the historian. I naïvely supposed that the same primary sources technique could within five years be applied to a study of Hitler. In fact it would be thirteen years before the first volume, Hitler’s War, was published in 1977 and twenty years later I was still indexing and adding to my documentary files. I remember, in 1965, driving down to Tilbury Docks to collect a crate of microfilms ordered from the U.S. government for this study; the liner that brought the crate has long been scrapped, the dockyard itself levelled to the ground. I suppose I took it all at a far too leisurely pace. I hope however that this biography, now updated and revised, will outlive its rivals, and that more and more future writers find themselves compelled to consult it for materials that are contained in none of the others. Travelling around the world I have found that it has split the community of academic historians from top to bottom, particularly in the controversy around ‘the Holocaust.’ In Australia alone, students from the universities of New South Wales and Western Australia have told me that there they are penalised for citing Hitler’s War; at the universities of Wollongong and Canberra students are disciplined if they don’t. The biography was required reading for officers at military academies from Sandhurst to West Point, New York, and Carlisle, Pennsylvania, until special-interest groups applied pressure to the commanding officers of those seats of learning; in its time it attracted critical praise from the experts behind the Iron Curtain and from the denizens of the Far Right. Not everybody was content. ...