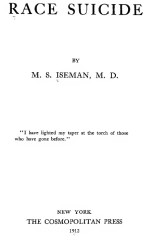 The purpose of this book is to make the American people think, to appeal to my fellow-countrymen to stay the practice of a great national sin whose consequence is to toll the passing of this great Anglo- Teuton people. Napoleon, after a triumphant return from one of his victorious campaigns, in reviewing the broken ranks of his shattered battalions, said, " What France needs is mothers " ; and if the American republic is to remain Anglo-Saxon and stand for the civilization of the West instead of the East, her women, particularly those of the old native stock, must become its mothers. Men give to their country its swords and lances, but the women give to it its men, and if the daughters of the Puritan and Cavalier will no longer give to their country its men and women, the empire founded by their forebears, with all of its glories and traditions, will in the course of a few generations pass to the Latin and the Hun. Nor should the men shirk their obligations to woman; they cannot place the yoke of industrial servitude upon her neck, nor surrender the daughters of the land to the mill, and from the blighted and fallow womanhood that comes out of the hopper mould the magnificent motherhood of the olden days. The welfare of our women, the future mothers of the race, is of far more importance to the country than its tariffs or trusts, and the welfare of a single factory girl is of as much moment to the nation as the opulence of its trade barons, its capitalists, and millionaires. And yet year by year the lawmakers of the nation, both State and national, waste and fritter away their time bickering for the spoils of party, shutting their eyes to the fact that the barbarians are swarming at our gates, and unless there shall come a refruition of the race,\even the roll-call of its Senators that now answer to the names called at Agincourt, Cressy, Inkerman, Bunker Hill, and Yorktown will be supplanted by the raucous gutturals of peoples who won our heritage not by the sword or spear, but by their cradles. And the priceless heritage of our fathers—the empire wrested by ax and flintlock out of the maws of the centuries, the younger realm of Milton, Shakespeare, and Tennyson, the land of Washington, Lincoln, Grant, Lee, and Jackson, the soil for which countless legions gave their lives—will pass to the alien and the stranger, because it is writ : " Weighed in the balance and found wanting." ...