Isherwood H. B. - Race and politics 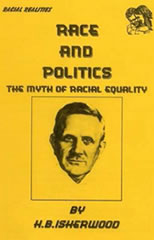 Natural inequalities. Probably the greatest single cause of the political turmoil disfiguring the world today is the Marxist or Socialist pretence that human beings are distinguishable only by their class in society or their religion or by the property they own, and that otherwise, irrespective of the race or nation to which they belong, are fundamentally equal to each other in nature, all endowed at birth with identical abilities, talents or potentialities, all instinctively seeking the same ends throughout life, and that if all had the same education or upbringing under similar conditions, with equal opportunities, could all reach the highest levels of the mind. Offending commonsense and contrary to all human experience, such a socially and nationally disruptive doctrine, both fallacious and absurd, has nevertheless been accepted in principle by the United Nations and has now been written into the laws of certain multiracial nations, including England and America, where the political pursuit of fictitious equality is having demoralising consequences. ...