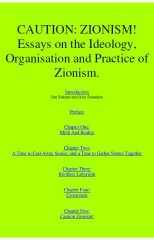 Introduction, Jim Saleam and Alec Saunders, September 1 2006. To the best of our knowledge, the present book is hard to obtain and most certainly had not been placed upon the Internet until we put it on this Site. We understand that an expurgated version has been published by Renaissance Press in New Zealand, a singular book-service under the direction of our redoubtable Kiwi comrade - Kerry Bolton. The present production had a small element of 'history' attached to it. The book was purchased by a Perth co-worker from a second-hand dealer. It bore the inscription 'To Peter Symon.....". Of course, Peter Symon had been then the General Secretary of the pro-Soviet Socialist Party of Australia and serves in the same position today for the Communist Party of Australia. We have published Caution Zionism! as a contribution to a historical debate.We do not say that this text is a perfect version of history. It is peppered with the verbiage of Marxism-Leninism, then the official ideology of the Soviet Union. It may also contain interpretations of historical evidence based upon Soviet need. However, that itself is also significant in the overall discussion. Zionism is a factor in international politics and in Australia's domestic politics. The Zionist elite is part and parcel of the New World Order systam and the prservation of the entity which usurped Palestine is part of its programme for endless war. Australia's Zionists are main players in the workings of the Auystralian state and necessarily - enemies of the idea of Australian independence. We commend this book to readers as essential background to an on-going struggle. CAUTION : ZIONISM ! by Soviet Marxist historian Yuri Ivanov is a convincing exposé of modern Zionism as an ideology, a system of organisations and the practical policies of the wealthy Jewish bourgeoisie. Basing his arguments on numerous documents and facts, the author shows that Zionism has been and is a bellicose reactionary force working against the genuine national interests of all people, the Israeli people inclusive. — Description on the back cover. ...