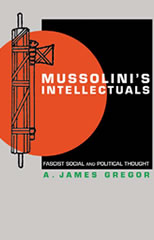 Preface. This book appears after almost four decades of study, conferences, discussion, and publication. Over those years, students of “fascism,1 as a subject of inquiry, have seen its “essence” change, in the judgments of scholars, from a movement of the “extreme right” into one that was neither of the “right” nor the “left.” We are now told that “Fascist ideology represented a synthesis of organic nationalism with the antimaterialist revision of Marxism.” From a political revolution entirely without any pretense of a rational belief system, we are now told, by those best informed, that “fascism’s ability to appeal to important intellectuals . . . underlines that it cannot be dismissed as . . . irrational. . . . In truth, fascism was an ideology just like the others.” Moreover, it has been acknowledged that “Fascism was possible only if based on genuine belief.” In effect, the study of Italian Fascism has delivered itself of significantly altered assessments over the past decades. Where, at one time, Fascism was simply dismissed as a phenomenon understood to be without intellectual substance, a right-wing excrescence that invoked violence and war, it is now more and more regularly understood to be a movement, and a regime, predicated on a reasonably well articulated belief system that engaged the rational commitment of many. For all that, there remains a residue of opinion that continues to deny Fascism the same reasoned beliefs that everyone readily grants to the political movements and regimes of Joseph Stalin or Mao Zedong.We are still told, for example, that unlike Stalinism and Maoism, “Fascism had few true believers who could also write articles and books.” Strange. ...