Jenks Jorian - From the ground up 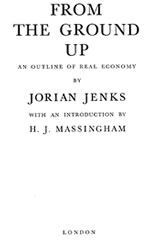 Author : Jenks Jorian
Title : From the ground up An outline of real economy
Year : 1950

Introduction. BY H. J. MASSINGHAM. MR JORIAN JENKS has the best possible qualifications for the formidable task he has set himself of exposing the pretensions of a false economics, based on the abstractions of money and the machine, and outlining the regenerative potential of Real Economy. For eight years he was a working farmer, tending his own stock, sowing his own corn, harnessing and driving his own horses and working side by side with his own men. In fact, he inherited the timeless economy of mixed husbandry as practised by the yeoman given official status in freehold, franchise, and freedom by an Act of 1430. In 1700, the yeoman numbered one-eighth of the population, breasting every social, political, and economic vicissitude up to the conquest of rural England in the nineteenth and twentieth centuries. He was celebrated in history and literature by Chancer, Holinshed, Harrison, Sir Thomas Overbury, Sir John Fortescue, the Robin Hood Ballads, Drayton, Fielding, Gilbert White, Collins, Cobbett, Wordsworth, John Clare, Richard Jefferies, Mary Mitford, Bewick, Crabbe the Younger, Scawen Blunt, George Eliot, Tennyson, William Barnes, and others. He was the ancestor of Shakespeare and wrote his own autobiography in such works as the I64I Farming BokeofHenry Best. Mr Jcnks was once himself a small yeoman, a member of that rural middle class that formed the first storey of the national building, broadly based from the plinth of the peasantry and firm to uphold the aristocratic and mercantile superstructure. But as the Industrial Revolution and its consequences finally demolished the yeoman freeholder, so Mr J enks was forced out of his vocation by the economic blizzard of the nineteen thirties. The practitioner of rural economy became the critic of modern economics, well known among the small resistance minority to its catastrophic repercussions. Now by this book time has had its revenges. ...