Jenks Jorian - The land and the people 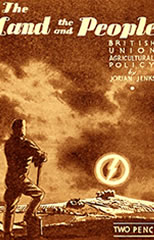 For at least sixty years Britain's agriculture has been going downhill. Since 1870, when the flood of imports first assumed formidable dimensions, we have lost no less than 6 million acres of ploughland, including 4 million acres of cereals. By no means the whole of this land has been converted into useful pasture, nor can increments in live-stock be said to compensate for the loss. Our sheep are actually fewer by 3 millions, and increases in cattle, pigs and poultry are more than offset by heavy imports of feedingstuffs. This tragic decline is not due to natural causes. Our land and our climate are still among the best in the world ; our agriculturists of all classes rank equally high ; and we can yet show some excellent examples of intensive farming. The blight which hangs over the countryside is the blight of persistent and deliberate neglect on the part of those responsible for our economic policy. No nation has a greater need of a productive agriculture ; no nation has made less effort to achieve it. The excuses advanced for this deplorable attitude are palpaple distortions of fact. Thus there is the glib statement that "we cannot feed ourselves," though no serious effort has yet been made to develop the full productivity of our soil, which expert opinion puts at fully double its present output. Again, it is said that people "cannot afford" to pay a fair price for their food, as if the poverty of consumers were the responsibility of producers. Actually the"cheap food" talk comes from vote hunting politicians rather than from the general public. And finally there is the extraordinary assumption that we can live only by selling manufactured goods to the rest of the world in exchange for its surplus foodstuffs, a dangerous assumption indeed at a time when there is a world-wide trend towards self-sufficiency. The plain truth underlying these specious excuses is that money invested in foreign-trade and international finance exercises a dominating influence over politics. Those who would benefit from a regeneration of our agriculture far outnumber those who derive profit from the international money-system. But because the latter have financial power, and therefore political influence, their interests are given priority. To such depths has " democracy " fallen. Agriculture has been sacrificed ; not because " farming doesn't pay," but because its activities might interfere with the flow of tribute to Mammon. ...