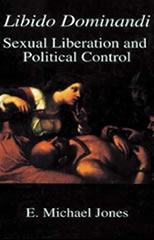 London 1996. Since Internet knows no place, it doesn’t really matter where it happened, but just for the record I was in England when I started getting e-mail messages from Lisa and Heather. At least, I think that’s what their names were. They wanted me to check out their hot web sites. Just as there is no place on the Internet, the names don’t mean much either. The important thing was that I was getting unsolicited solicitations for pornography. Spam is, I think, the generic term for this unsolicited material. The pornographic variations are known as blue spam. I was planning to protest to CompuServe and ask them not to make my name available to these agencies when I got some blue spam from CompuServe itself, offering its own pornographic services. Quis custo-diet ipsos custodes ? What sells itself as an e-mail service turns out to be a pimp. The situation I have since learned is even worse with AOL, according to one subscriber to that on-line service, who spends each day clearing his electronic mailbox of hundreds of such solicitations. In the recent court case challenging the constitutionality of the Communications Decency Act, CompuServe signed an amicus curiae brief supporting the pomographers. Predictably, given our judicial system, the three-judge panel in Philadelphia handling the case found the CDA unconstitutional. One of the judges opined that “just as the strength of the Internet is chaos, so the strength of our liberty depends upon the chaos and cacophony of unfettered speech.” The world “liberty” coming from one of the regime’s mandarins is a dead giveaway that what we’re really talking about here is bondage. What I would like to propose here is a paradigm shift of simple but nonetheless revolutionary (or better still counter-revolutionary proportions) by saying what should be obvious to anyone who has visited these web pages and who has had Heather or Lisa ask for his credit card number, namely, that pornography is now and has always been a form of control, financial control. Pornography is a way of getting people to give you money which, because of the compulsive nature of the transaction, is not unlike trafficking in drugs. ...