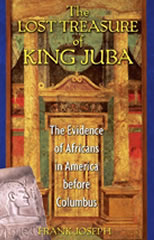 Author : Joseph Frank
Title : The lost treasure of king Juba The evidence of Africans in America before Columbus
Year : 2003

Preface. As the editor in chief of Ancient American magazine, I am regularly prevailed upon by mostly amateur archaeologists to publish their reports of overseas visitors to our continent during pre-columbian times. While many of these submissions may be interesting, sometimes provocative, they are usually unsubstantiated by any credible physical evidence. A story first brought to my attention in 1993, however, was supported by an abundance of material items—more than seven thousand, in fact. The sheer volume of such alleged proof combined with the often superb workmanship of numerous individual pieces argued persuasively on behalf of their authenticity. Even so, I was baffled by not only the magnitude of the discovery, but also the profusion of its disparate cultural imagery. How was one to account for images that appeared to be Romans, Celts, Christians, Jews, West African blacks, Egyptians, and Phoenicians all represented together at a single, subterranean site in, of all places, southern Illinois? Over the next nine years, I not only described the Burrows Cave collection in several feature Ancient American articles, but also undertook my own investigation of the supposed artifacts to determine their authenticity, at least to my own satisfaction. The conclusions of various authorities in mineralogy and ancient written languages I consulted suggested that retrieval of the seven thousand images found near a tributary of the Ohio River represented the greatest archaeological event in history, far more spectacular than the opening of Pharaoh Tutankhamen’s tomb sixty years before. The Illinois tomb not only appeared to contain vaster amounts of buried treasure, but, more valuably, also demonstrated that Roman-era visitors crossed the Atlantic Ocean to establish a settlement in North America nearly fifteen centuries before Columbus sailed from Spain. Although the saga of these voyagers is far from completely understood and the unveiling of Burrows Cave signifies a work in progress, both are aspects of a story that must be told. I have combined years of my own research with the expertise of professional scientists and enlightened enthusiasts alike to create a mosaic from different fragments of evidence. Bringing these pieces together - fitting them into a complex archaeological puzzle - was my purpose in writing this book. Through its pages march heroes and villains, tyrants and freedom fighters, mystics and profiteers, victors and survivors. Their story is valuable because it is our story, lost for the last two thousand years but now gradually coming to light from its underground burial sanctuary. With its retelling, the dead will live again, and the roots of American history, far deeper and older than suspected, stand revealed. ...