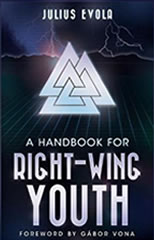 Editor’s Note. This book is a collection of essays that has no equivalent among the original Italian publications by Julius Evola, having been assembled from essays originally printed in Italian periodicals over the course of Evola’s lifetime by the Hungarian traditionalists, as described in the Bibliographical Notes. The Hungarian edition of this book was published by the traditionalist house Kvintesszencia Kiadó (www.tradicio.org) in Debrecen, Hungary in 2012. We extend our sincerest gratitude to Dr Tibor Imre Baranyi and the rest of the staff of Kvintesszencia Kiadó for allowing us to create an English edition of this book, and to Gábor Vona, Chairman of the Jobbik party, for giving us permission to use his Foreword. All of Evola’s essays were translated from the original Italian by SK, with the exception of ‘Orientations: Eleven Points’, which was translated from the Italian by Professor E Christian Kopff. The Foreword and the Bibliographical Notes were translated from the Hungarian by Anna Gyulai. We extend our particular thanks to Prof Kopff and Ms Gyulai, who did their work as volunteers. The original dates and places of publication for all of Evola’s essays are given in the Bibliographical Notes. The footnotes to the text were added by me, and are so marked; those footnotes which have no attribution were part of the original Italian texts and were added by Evola himself. Where sources in other languages have been cited, I have attempted to replace them with existing English-language editions. Citations to works for which I could locate no translation are retained in their original language. Website addresses for online sources were verified as accurate and available in January 2017. The Hungarian edition of this book was edited by Dr Tibor Imre Baranyi and Róbert Horváth. JOHN B MORGAN IV. Budapest, Hungary, 18 January 2017. ...