Keith Jim - Saucers of the Illuminati 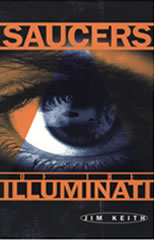 Foreword by Kenn Thomas. I remember Jim Keith writing this book. At the time, he was also working on an article for the coming issue of Steamshovel Press. Jim contributed regularly to the magazine and stayed in phone contact for research help and to chat conspiracy. He mentioned that he was trying to summarize all of his current thinking in a single themed manuscript. The original Saucers of the Illuminati, in fact, may have been Jim Keith's last contribution to the zine world. The original book had an 8x10 format, spiral bound and resembled more a magazine than a book. Then, many people who knew Keith at all knew him primarily through his small-circulation "fan" magazines (although it is hard to conceive of a conspiracy/UFO cover up "fan"), Dharma Combat being the most well known but certainly not the only example. Zines were the happening means of the parapolitical underground in those pre-internet days and Keith served as the super-celebrity of that scene, broadcasting his charm and humor through self-published photocopied wonders, but also writing letters and doing commentary for similar zines produced by others. Going through my stack of Keith masterworks recently, I discovered Notes From The Hangar #1 from the early 1990s. In it, Keith published the rant of one Jason Bishop III, making declarations about humans working side-side with aliens in Dulce, New Mexico. Today it has become quite a familiar story, but at the time it was lore that had yet to reach the pinnacle of its currency in UFO circles. In fact, it was still part of what I see as a "barium meal" of UFO disinformation perpetrated by Air Force intelligence agents partly to drive a man named Paul Bennewitz insane.¡ In Notes In The Hangar, Jim presented the rant without edit and included several pages of critical response, declaring that he didn't necessarily believe any of it, but he believed in the importance of having it all discussed. In Saucers of the Illuminati, Keith summarized his understanding of that history in a chapter entitled "MJ-12". That chapter remains one of the most concise and complete reviews of that important episode in the history of the ufological subculture, but at the same time comprises only a portion of what this book has to say. From there Saucers expands upon Keith's notions about the arcane and occult forces behind human history. ...