Kemp Arthur - March of the Titans 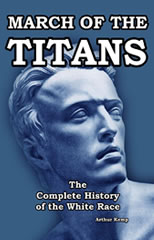 Author : Kemp Arthur
Title : March of the Titans The complete history of the White race
Year : 1999

Foreword. Foreword to the Pinnacle Edition (2011) This volume is, by far, the biggest and most complete version of March of the Titans yet published. It contains a large number of new sections, new pictures, and updated text. The sequential order of the chapters has remained the same, with one exception: the prologue now combines the basic explanation of race as a taxonomic concept and discusses the rise and fall of civilizations, as opposed to previous editions which saw it buried in chapter nine. Finally, I must thank my wife Jeannine from the bottom of my heart for all her work, encouragement, and effort. She is also my editor-in-chief and has worked tirelessly in this regard. I cannot think what I would have done without her. Arthur Kemp 15 November 2011, Chester, UK Foreword to the 1999 edition The idea for writing this book came from a perusal of the history section of the Jagger Library at the University of Cape Town, South Africa, in 1983. While undertaking some unrelated research, I chanced upon a book dealing with the history of the Chinese people. Intrigued, I investigated further in that section of the library. I found rows of books dealing with the history of the Japanese, the black race, the Incas, Aztecs, the Australian Aborigines, the Arabs, the Native Americans, the Polynesians—in fact there was a history of every people and every race on earth—except, much to my surprise, the white race. This lack of a history of the white people of the world has persisted to this day: and it is to correct this imbalance that this book has been written. As it is a history of a defined race, not of any particular country, its narrative follows several continents and centuries, not limiting itself to any one geographical region. I have always felt that the point of studying history is not the memorizing of some dates and facts, but rather the search for and discovery of the forces causing the results we see before our eyes as historical events. History lost its value through the efforts of academics producing lists of meaningless dates and names, expecting everyone else to be as interested in their lists as they are. The proper study of history is in reality a tremendously exciting field of endeavour—the exploits and tribulations detailed in this book will hopefully convince sceptics of this! More importantly, history does indeed contain lessons—sobering ones, with massive implications. As this book will show, it raises issues which confronted past civilizations and which confront modern society—how we answer them will determine if our society will survive or vanish like those of old. Arthur Kemp 14 September 1998, Oxford, UK. ...