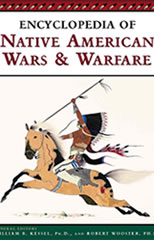 Preface. Native American wars and warfare have been part of life in North America for thousands of years. Encyclopedia of Native American Wars and Warfare, however, concentrates on the conflicts that arose after Christopher Columbus set foot in the New World in 1492. From then until the late 1800s, the number of armed conflicts among Native American groups and between Indians and their non-Indian opponents reached significant proportions. Many of the names of wars and battles fought during those years, as well as the names of combatants, have become household words. The encyclopedia constitutes an attempt to sort through the plethora of historical data and identify the key people, places, and events of that period, as well as more recent times. The book itself is arranged in encyclopedia form, with more than 600 entries arranged from A to Z. The entries themselves cover a variety of topics, including wars, battles, treaties, tribes, individuals, places, ceremonies, weaponry and other paraphernalia, and concepts. It is, of course, impossible to include lengthy discussions of each topic in a one-volume encyclopedia. Therefore, the articles vary in length depending on the importance of the subject and the data available. In all cases, care has been taken to ensure that relevant, pertinent, and factual information has been included. Additionally, the volume’s photographs, illustrations, and maps provide for a richer understanding of the people and places discussed. ...