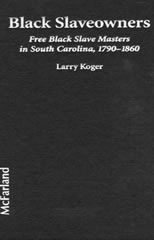 Introduction. Black slaveholding is a historical phenomenon which has not been fully explored by scholars. Graduate students of history are often surprised to learn that some free blacks owned slaves. Even historians are frequently skeptical until they discover the number of black masters and the number of slaves owned by them. To many readers, slavery was an institution exclusively utilized by white slaveowners. The fact that free blacks owned slaves has been lost in the annals of history. Yet at one time or another, free black slaveowners resided in every Southern state which countenanced slavery and even in Northern states. In Louisiana, Maryland, South Carolina, and Virginia, free blacks owned more than 10,000 slaves, according to the federal census of 1830.' Many of the black masters in the lower South were large planters who owned scores of slaves and planted large quantities of cotton, rice, and sugar cane. In 1860, for example, Auguste Donatto, a free colored planter of St. Landry Parish in Louisiana, owned 70 slaves who worked 500 acres of land and produced 100 bales of cotton. About 600 miles to the east of Louisiana in the county of Sumter, South Carolina, William Ellison, a free colored planter, used the labor of 70 slaves to cultivate 100 bales of cotton in 1861. In South Carolina, Robert Michael Collins and Margaret Mitchell Harris used their slaves to till the soil of Santee Plantation and grew 240,000 pounds of rice in 1849. But the majority of the large colored planters lived in Louisiana and planted sugar cane. In 1860, Madame Ciprien Ricard and her son Pierre Ricard, free mulattoes of Ibeville Parish, owned 168 slaves. The joint operation of mother and son used the labor of slaves to produce 515 hogsheads of sugar in 1859. Yet not all of the black masters were planters or from the South. In fact, the city of New York had eight black slaveowners who owned 17 slaves in 1830. In short, the institution of black slaveowning was widespread, stretching as far north as New York and as far south as Florida, extending westward into Kentucky, Mississippi, Louisiana, and Missouri. One may ask, where did these free black masters come from ? Many of them were former slaves who were manumitted because of their kinship ties to whites, while others were emancipated for meritorious military duty, faithful service, or saving a life, as well as other reasons. But the majority of the black masters never knew the dehumanization of slavery because they had been born of free black parents. However, the ranks of the slave masters included not only free blacks but also nominal slaves. In many instances, blacks who were not legally emancipated assimilated into the free black community and later became slaveowners. By and large, the community of black masters came from a diverse background which included persons of free and slave status. ...