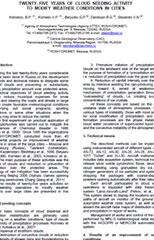 Introduction. During the last twenty-thirty years considerable work has been done in Russia on the development of methods and technical means to dissipate some forms of clouds and preventing or substantially reducing precipitation amount over protected areas. The practical objectives of cloud seeding activity were to reduce municipal expenses for snow removal and clearing the roads and streets in large cities, to create favorable meteorological conditions for carrying out social programs, sporting competitions or some other situations when the necessity may arise to reduce the rainfall. The first experiment on practical application of these opportunities was carried out to mitigate the consequences of Chernobyl disaster in 1986 /Beriulev et al. 1990/. Since 1995 the organizations of ROSHYDROMET conducted more than 40 experimental projects on improvement of weather conditions in areas of the large cities – Moscow and St.Petersburg (Russia), Tashkent (Uzbekistan), Astana (Kazakhstan) /Bedritsky et al., 1996, Belyaev et al., 1996, Korneev et al., 2003, Koloskov et al., 2007/. The main purpose of these activities was the dispersal of clouds and reduction or prevention of precipitation over the protected areas. The technology of rain mitigation has been successfully used during Beijing 2008 Olympic Games opening and closing ceremonies /Zhang Qiang et al., 2011/. Some results of twenty-five years activities on cloud seeding operations to modify weather conditions over large cities are presented in this paper. ...