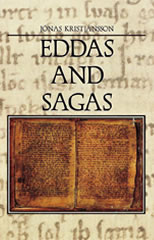 Preface. This book was originally written as part of a general history of Iceland, intended for the Icelandic reading public and published to commemorate the eleven hundredth anniversary of the settlement of Iceland in 874. The present translation is slightly augmented, and certain passages have been rewritten, but otherwise there is little change from the Icelandic version. As a consequence the book occasionally presupposes an Icelander’s knowledge of the subject or gives a different emphasis than would have been the case if it had been originally intended for foreign readers. But if there is a slight disadvantage in the fact that the book was written for Icelanders, there ought to be a decided advantage in the fact that it was written by an Icelander, for none but Icelanders can fully participate in this unique national literature. Only we speak this ancient language and only we have the setting of the sagas in our daily view. Thus it ought to be of benefit for foreigners to be led through this landscape by an Icelandic guide. ...