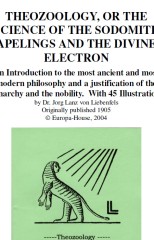 Author : Lanz Adolf-Joseph (Lanz von Liebenfels Jörg)
Title : Theozoology, or the science of the sodomite apelings and the divine electron. An Introduction to the most ancient and most modern philosophy and a justification of the monarchy and the nobility.
Year : 1905

The truth, which I am submitting chiefly to my close and dear friends, is a historically well-established fact, which humanity has intentionally forgotten. Until now its revelation has been prevented by all sorts of tortures and persecution. It is the truth which that one taught about whom it is said that he is "set for the fall and rising again of many" (LK. II.34). That my re-discoveries will be the fall of many, I am firmly convinced, therefore I am preparing myself for the most furious attacks, and I only welcome them. But besides my friends, there are certainly many other people this book could lead to a resurrection, to whom it will say and confirm nothing new -- but rather it will express their already long-held ideas. If this book is not scientific enough for the reader, I direct him to my exhaustive treatment: Anthropozoon Biblicum in Vierteljahresschrift fur Bibelkunde (Berlin: Calvary). However daring what I am presenting may sound, it is nevertheless formulated from thoroughly reliable historical sources according to strictly scientific methods, and it will be confirmed in the most astounding way by the latest discoveries of the natural sciences and ancient finds of art historians. The scientific treatises of the ancients are written in a secret language and contain absolutely no absurdities or fables. Based upon the artistic products of the ancients we have no reason to consider them as less intelligent than modern man. The ancient geographer Strabo says (C. 474): "Every inquiry concerning the gods explores the old notions and fables (mythoi), while the ancients concealed their natural ideas, which they preserved in these events in parables, and always mixed their inquiries with the fables." Thus also Pythagoras, as well as Plato and Jesus, had two types of teaching and two types of students. "To you is given to know the tune secret (Ulfilas) of the Kingdom of God; however, to those who are outside, everything will be done in parables (parabolai)." The Mandeans gave the aeons, the primal cosmic entities, very distinctive names, such as: "doors," "dwellings," "grape-vine," "the water of life," "the second death," "the great light," "the primeval man," and "great wagon driver." The Jerusalemites were sachas-people; one man asked his neighbor: What did you have your meal with today? With "bread" made from leaven "flour," or from unleavened "four"? With Godolic "wine" ... on a wide "cushion," or on a narrow "cushion" in good or bad company. R. Hisda explained: "Everything (is meant) in the erotic sense." The original oriental texts and various ancient translations and commentaries of the more ancient Fathers give us the key to this secret language and from this we may receive the unfathomable wisdom of the ancients. ...