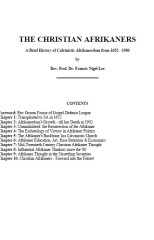 Foreword. by Rev. Owen Fourie, Vice-Chairman, Gospel Defence League, Cape Town, Republic of South Africa. It is with great pleasure that I commend this book to the Christian world at large. These ten lectures constitute the last of a series of twenty-five. They were all originally delivered during 1980 at Geneva Divinity School in Texas, which kindly released the cassette tapes hereof to the Mt. Olive Presbyterian Tape Library in Bassfield, Mississippi. This present book is based on my transcription from those cassette tapes. Miss Nancy Hooper of Griffin, Georgia, USA, who has been assisting Gospel Defence League, typeset the manuscript and did the artwork. A few further observations about this are necessary, especially for readers in the nineteen-nineties. First, the author of these lectures. Dr. Lee was born in Britain (of a South African father) in 1934, but resided in South Africa from the age of seven until his departure in 1967. Dramatically converted in a Welkom goldmine in 1955 - he received his initial tertiary education at the Universities of Cape Town, Stellenbosch, the Orange Free State, and Potchefstroom University for Christian Higher Education. As a Church History Professor who has lived on four continents, Dr. Lee is ideally equipped to give a truly objective evaluation of "The Christian Afrikaners." Second, the time of these lectures. Dr. Lee delivered them in 1980. They represent his perception of the Afrikaners, till his leaving the RSA - together with his ongoing perception of them, while he was living in the USA for eleven years till 1980. He is well aware of developrnents in the RSA since then, but thinks it best - especially for the sake of Afrikaners - to remind them of what they were in 1980 (rather than what some of them had becorne by 1992). Third, the place of these lectures. Dr. Lee delivered them, by special invitation, in Texas - right before he left the USA to take up his present professorship in Australia. American, British, Australian and South African readers are all asked to bear in mind that he was then endeavouring to present his subject in a way easily understandable especially to enquiring Americans. Fourth, the relevance of these lectures. There have been drastic changes in the RSA since Dr. Lee departed in 1967, and especially since he subsequently delivered these lectures in 1980. Yet the writer of this Foreword believes there is great merit in presenting these lectures just as they are - especially in the hope of calling the Afrikaner back to his better values (which are now quite obviously being coinpromised in so many ways). Fifth, the incompleteness of these lectures. It must be remembered they were delivered only after fifteen immediately antecedent studies on the general theme: "The Eschatology of Victory from Adam to the Afrikaners." Those fifteen lectures dealt with the eschatology of victory respectively in: the Old Testament; the Apocrypha; the New Testament; the Apostolic Fathers; the Second- Century Patristics; the Third Century; the Fourth and Fifth Centuries; the Middle Ages to the Protestant Reformation; John Calvin (on the Law of God); John Calvin (on Eschatology); the Heidelberg Catechism and the Belgic Confession; John Knox to the Synod of Dordt; Seventeenth- Century Dutch Reformed Thought; Dutch Calvinism from Groen van Prinsterer to Kuyper and Bavinck; and Dutch Calvinism from Willem Geesink to A.A. van Ruler. Hopefully those fifteen antecedent lectures can yet get published at some later time, in order to give the full sweep of Dr. Lee's "Eschatology of Victory from Adam to the Afrikaners." Meantime, may God richly bless the following lectures throughout the Western world ! ...