« Freedman Benjamin H. - Zionism The hidden tyranny - Was Michael Jackson destroyed due to his »

Lehmann Leo Herbert - Behind the Dictators 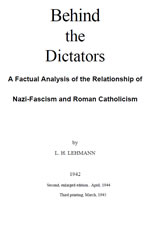 Author : Lehmann Leo Herbert
Title : Behind the Dictators A factual analysis of the relationship of Nazi-Fascism and Roman Catholicism
Year : 1944

Chapter 1. Jesuits, jews and freemasons. It is impossible to understand fully what has been taking place in the world for the past twenty-five years unless we are able to grasp the underlying significance of what appears on the surface. It is necessary to penetrate behind the scenes of day-today happenings and examine thoroughly the active forces and planned objectives which are responsible for all that has come to pass so quickly in the past few years. The 19th century left us deplorably weak in true knowledge of the history of State-Church conflicts. The facts of human development since the Reformation have become so inextricably tangled, that we have ceased to try to unravel them. We content ourselves in America with a mere superficial knowledge of events, and the conclusions arrived at, far from helping us to get at the real truth, only drive us farther away from an understanding of the real meaning of these events. Too much emphasis has been placed upon the mere economic aspect of the world-situation. The ideological and theoretical origins of Nazi-Fascism, as a consequence, have been almost entirely overlooked. Research is necessary to show where social, political and religious conflicts cross one another. There is abundance of incontestable proof that the forces of religion, as represented by the Catholic Church, have succeeded in dominating the political and social field, and that there exists a close bond between them and the origins, methods and objectives of the whole Nazi-Fascist movement in Europe. Furthermore, this domination has already spread to America. History proves that in every attempt made during the past half century against the liberal progress of mankind, the Jesuit Order, as the leader of Catholic action, has played a decisive role. We can go even so far as to state that Nazi-Fascism had its origin in the Society of Jesus, and that, like other movements in the past analogous to Fascism today, it was planned to serve the traditional aims of the disciples of Ignatius Loyola. ...

« Freedman Benjamin H. - Zionism The hidden tyranny - Was Michael Jackson destroyed due to his »