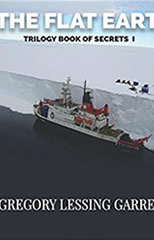 This is an Anthology. This book is an Anthology of my writings and others on the topic of Flat Earth Plane Cosmology of all types, Enclosed Earth, Hollow Earth, Concave Earth, Infinite Plane Earth, The Enochian Earth Model, etc.… I have attempted to assemble the best research on the general idea of Flat Plane Earth possible, and posit various explanations, theories, observations, conjectures, and empirical facts regarding this topic. This book is book one of The Flat Earth Trilogy Book of Secrets series I am writing to encompass the core themes of Flat Earth, as well as going into great detail into various theories otherwise not explored within the traditional cannons of Flat Earth pedagogy. My hope is that the ideas expounded in this Flat Earth Trilogy series will provide compelling justifications for the claim that no curvature can be found on the Earth, which points to the empirical conclusion that we live on a plane and not a spinning ball in science fiction outer space. The details regarding the possible topography of the Earth are discussed in depth in this book, but ultimately, the absolute true topography of the Earth is not known by anyone. I have my preferences of course, but in laying out as much information and theoretical material as possible pertaining to the topic of Flat Earth, I would hope that you draw your own conclusions and create your own geographical preference. As I have mentioned in other books I have written, it is never any one data point that proves the validity or non-validity of a theory like Flat Earth or any other theory. It is the summation of myriads of data points that points to the high plausibility of such a theory as an almost certainty, which is a good as science ever gets with any theory. ...