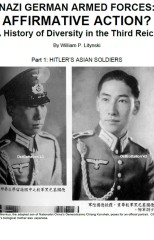 Chiang Wei-kuo (left), the adopted son of Generalissimo Chiang Kai-shek, served as a commander of a panzer division during the 1938 Anschluss. “Ching-kuo’s stepbrother Wei-kuo, meanwhile, was developing his military career. He had taken part in the union of Austria and Germany (the Anschluss) as a German sergeant-cadet. He graduated in 1939 just before the outbreak of war, then spent a year at the U.S. Army’s armored force center at Fort Knox. The Generalissimo had kept Wei-kuo’s existence hidden from Mayling for thirteen years, but once he acknowledged him, she quickly came to enjoy her suave, handsome, English-speaking stepson, who was a second lieutenant in an army unit deployed against the Japanese along the Yellow River near Xi’an.” – The Generalissimo: Chiang Kai-shek and the Struggle for Modern China by Jay Taylor, p. 186-187 “Addressing a huge crowd in Nanking on Double Ten Day (October 10), 1936, Chiang Kai-shek declared, “The remnant Communists are now encompassed in a few scattered regions and can be exterminated without much difficulty. At present, communism is no longer a real menace to China.” After his speech, Chiang stood and saluted as spit-and-polish military units marched by in goose step followed by row after row of powerful German weapons. Thanks to German machine tools, Chinese arsenals were now capable of producing some weapons of quality and precision. Even so, the new German adviser, Alexander von Falkenhausen, believed that China needed two more years to reach his goal of sixty well-trained, modern divisions. New German heavy coastal guns, a dozen submarines, a German cruiser, torpedo boats, and other warships were not due to be delivered before 1938. The Luftwaffe had taken over training the Chinese air force, and if things went according to plan, Chinese pilots by 1939 would be flying modern Messerschmitts and Stukas, marking a profound change in the balance of power between China and Japan.” ...