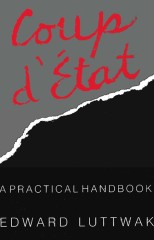 Foreword. Coup d'Etat, the brilliant and original book of a then very young man, first published in 1967, attracted immediate attention and appeared subsequently in the major languages. It is perhaps of even greater interest today, simply because it has become dearer during the last decade that far from being a fortunately rare exception in an otherwise civilized world order, the coup d'etat is now the normal mode of political change in most member states of the United Nations. There are by now many more military dictatorships in existence than parliamentary democracies, and there are few cases on record in which such dictatorships have been overthrown by 'popular revolts'. Far more often the military men are replaced by one or more of their colleagues. Yet with all this there has been a virtual taboo on the study of coup d'etats, and some critics of the present book obviously did not know quite what to make of it. It is in many ways easy to see why: the idea that a coup d'etat can be carried out in many parts of the world with equal ease by small groups of men of the left and the right (and, for all one knows, also of the centre), provided they have mastered some elementary lessons of modern politics, is, of course, quite shocking. Marx and Engels wrote a great deal abollt revolution but hardly ever about the technique of revolution; the only nineteenth century left-wing leader who provided detailed instruction in this respect was Blanqui, and he was not very successful. There had been one other predecessor Gabriel Naude, whose work was published in Paris in the late seventeenth century; an English translation by Dr. William King appeared in 1711 (Political considerations upon Refined Politicks and the Master Strokes of State). Some of this sounds very topical indeed: 'The thunderbolt falls before the noise of it is heard in the skies, prayers are said before the bell is rung for them; he receives the blow that thinks he himself is giving it, he suffers who never expected it, and he dies that look'd upon himself to be the most secure; all is done in the Night and Obscurity, amongst Storms and Confusion. ' But Naude has been forgonen for a long time, and his concept of the 'master stroke' was, in any case, much wider than that of coup d'etat in its present meaning. In our time whole libraries have been wrinen on the objective conditions in which revolutions take place, about civil and peasant wars, about revolutionary and internal war, about guerrilla activities and terrorism, but almost nothing on coup d'etats, and this despite the fact that there have been few, if any, revolutions of late and that 'objective conditions' are always only one of several factors involved in their genesis. Seen in this light coup d'itats are annoying not only for practising politicians but also from the point of view of the political scientist. For on the basis of 'objective conditions' models and panerns can be built without undue difficulty, whereas coups are quite unpredictable, almost by definition they are mortal enemies of orderly hypotheses and concepts: how does one account scientifically for the political ambitions of a few strategically well placed individuals ? All this is highly regrenable but it does not lessen the need for more thorough and detailed study of coup d'etats. For according to all indications this .seems to be the 'wave of the future' - much more than other, far more often discussed, forms of political violence. A study of guerrilla warfare led me to the conclusion that the army in most third world countries is the strongest contender for domestic power: during the last.fifteen years there have been some hundred and twenty military coups, whereas only five guerrilla movements have come to power - and three of these followed the PortUguese coup in 1974. The funciion of the guerrilla movement has reverted to what it originally was - that of paving the way for and supporting the regular army: it holds the stirrup so that others may get into the saddle, and the same applies, a fortiori to terrorist groups. It is true that in some parts of the world it has become more difficult to stage a military coup. Once upon a time the commander of a tank brigade in a middle Eastern country was at least a potential contender for political power. This is no longer so, partly as the result of centralization in military command, partly because the political police have become more effective. But if in these pans coups have become less frequent they are still the only form of political change that can be envisaged at the present time. But even if coups are unpredictable, even if they defy known methods of interpretation (let alone of prediction), they contain certain ever recurring patterns - 'the same always different' - from the time the conspiracy is first hatched to the actual seizure of power. The present book is a major landmark in a field hitherto almost uncharted. Walter Laqueur. Washington - London. October 1978. ...