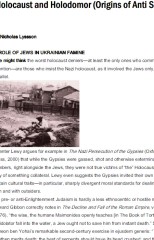 ROLE OF JEWS IN UKRAINIAN FAMINE. One might think the worst holocaust deniers—at least the only ones who command serious attention—are those who insist the Nazi holocaust, as it involved the Jews only, was without parallel. Guenter Lewy argues for example in The Nazi Persecution of the Gypsies (Oxford University Press, 2000) that while the Gypsies were gassed, shot and otherwise exterminated in great numbers, right alongside the Jews, they were not true victims of “the” Holocaust (capital “H”) but only of something collateral. Lewy even suggests the Gypsies invited their own destruction with certain cultural traits—in particular, sharply divergent moral standards for dealing among their own and with outsiders. But pre- or anti-Enlightenment Judaism is hardly a less ethnocentric or hostile moral system. As Edward Gibbon correctly notes in The Decline and Fall of the Roman Empire, vol. 1, ch. 15 (1776), “the wise, the humane Maimonides openly teaches (in The Book of Torts, 5:11) that, if an idolator fall into the water, a Jew ought not to save him from instant death.” See also Rabbi Simeon ben Yohai’s remarkable second-century exercise in ejusdem generis: “The best of the heathen merits death; the best of serpents should have its head crushed; and the most pious of women is prone to sorcery” (Yer. Kid. iv. 66c; Massek. Soferim xv. 10; comp. Mek., Beshallah, Wayehi, 1, and Tan., Wayera, 20, all as cited by JewishEncyclopedia.com). For “heathen” some translators simply write “goyim”; for “prone to sorcery” they write “a witch.” Rabbi Simeon is mentioned more than 700 times in the Talmud. ...