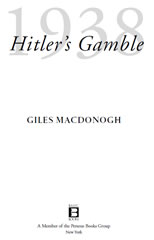 Introduction. The year 1938 was one of cataclysmal change for Germany. On January 1, the Reich was administered by a right-wing coalition led by the chancellor, Adolf Hitler, and dominated by members of the Nazi Party. The army had sworn a personal oath of allegiance to Hitler, but its commanders had managed to retain a degree of independence. The country lay confined within borders decreed by the Treaty of Versailles nearly twenty years before. Hitler so far had contented himself with policing his own house and grabbing back the Demilitarized Zone in the Rhineland. He had yet to pursue any foreign adventures. Although stripped of their roles in German public life, Jews were still allowed to possess their own property, and many continued to lead relatively normal lives. They were evidently in no hurry to leave. By New Year’s Day 1939, everything had changed: The non-Nazis had been purged of all but a few insignificant roles in government; Hitler had assumed total control of the armed forces; Germany had invaded Austria and the German-speaking areas of Czechoslovakia; Jews had been robbed, beaten, and imprisoned, and many had been driven into penurious exile. Hundreds had been killed. Hitler emerged deus ex machina, with all the powers of the Nazi regime consolidated in his own person. And worse was to come. That Germans felt an increase in stress and anxiety during those twelve months is borne out by one telling statistic: Their consumption of strong alcohol doubled in the course of the year. ...