MacLeod Roy - The library of Alexandria 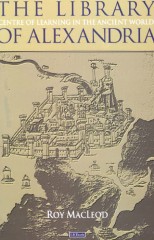 Author : MacLeod Roy
Title : The library of Alexandria Centre of learning in the ancient world
Year : 2000

When Julius Caesar captured Alexandria in 47 Be, the ancient library that bore the Macedonian's name was in ruins. In the fires that raged along the harbourside, and ravaged Ptolemy's fleet, thousands of scrolls collected and composed by nine generations of resident scholars and philosophers were consumed. More destruction in AD 450 removed from scholarship a priceless inheritance of Greek, Hebrew, and probably Mesopotamian literature, and much of what was then known of ancient Egypt. What had been not the only, but perhaps the most famous library, museum and even garden of the Hellenistic period, was banished to the attics of legend and myth. Despite this loss, or rather because of it, the ancient Library has never lost its hold on the European imagination, and in recent years, has begun to win increasing attention from historians and students of literature and science. Scholars, who for years have taken its legacy for granted, are now re-examining its history for what it can tell us about classical methods of studying literature and science, and about the transmission of ideas across cultural frontiers. Today, this interest in the past is being encouraged by a vision of the future - the Bibliotheca Alexandrina, an ultra-modern library and conference center, developed under the auspices of UNESCO and the Egyptian government, and rising on the shoreline of Alexandria, near the place where the ancient buildings are thought to have been. This international enterprise is dedicated to the advancement of knowledge, and will attract scholars from many countries. It will celebrate the cosmopolitanism that is the city and culture of Alexandria, and the traditions of internationalism, critical questioning, and freedom of enquiry that were at varying times the hallmarks of the ancient Library. To assist the new project, and to broaden its range of acquisitions, organisations of Friends of the Alexandria Library have been established throughout the world. In Sydney, the Australian Friends have undertaken a range of programs and activities in music, art and literature. As a contribution to this activity, and in homage to the Library'S legacy, a group of Australian historians, archaeologists, classicists and medievalists embraced an opportunity to share recent work on the Library's significance. This volume is the result. It seems particularly fitting that scholars from one of the younger nations in the academic world can in this way participate in the renewal of this renowned center of ancient learning. In so doing, we celebrate Alexandria's contribution to the common culture of European nations, and to the international exchange of ideas about the natural world. I should like to express thanks to Ms Jill Barnes for her excellent assistance in bringing this book to completion and to my authors, who made it such a fascinating adventure. Finally, it is a special pleasure to pay tribute to the work of Lorenzo Montesini, and to the Australian Friends of the Alexandria Library, to whose efforts and enterprise this book is dedicated. Roy MacLeod University of Sydney. ...