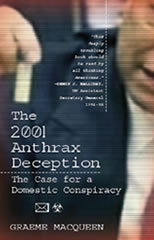 Acknowledgements. I would like to offer my gratitude to Paul McArthur for organizing the first event in which I had the opportunity to talk publicly about the anthrax attacks. David Ray Griffin was a cospeaker at that event and I thank him for encouraging me, then and on subsequent occasions, to write up the results of my investigation. Researchers who preceded me in the study of the anthrax attacks gave me prompt and generous assistance. Elias Davidsson and Barbara Honegger were ready to help. Meryl Nass read the manuscript carefully and gave detailed advice. Barry Kissin helped me at every stage of the research. He encouraged me, told me when he thought I was going off-track, and introduced me to sources of information that were new to me. Philipp Sarasin’s work was an essential source of inspiration, prompting me to look at aspects of the anthrax discourse I would otherwise have missed. Herbert Jenkins read an early version of this book and offered constructive criticism. Elizabeth Woodworth carried out a detailed reading of several drafts and had much useful advice. She shared generously her own research materials and suggested I refashion into a book what was originally an academic article. Tod Fletcher copy-edited the manuscript twice and gently forced me to explain myself more fully, opening up my dense writing so that it would cause the reader fewer headaches. He also provided me with information that was new to me. I am very grateful to him. I will not try to list all the friends and researchers who have supported my investigations over the years into the violent events of the fall of 2001, but I wish to give warm thanks to James Gourley, Laurie Manwell, Adnan Zuberi and Kevin Ryan, fellow members of the Steering Committee of the International Hearings on the Events of September 11, 2001. In his role as coeditor of the Journal of 9/11 Studies, as well as through his detailed investigations of the crimes of 9/11, Kevin Ryan continues to be an exceptional source of help and inspiration. I am grateful to Michael Keefer, Martha Nalband, Atif Kubursi, Rama Singh, Barrie Zwicker, Joanna Santa Barbara, Jack Santa Barbara, Sharon Mac-Queen and Jessica MacQueen for fruitful conversations, new ideas and support. I offer thanks and appreciation to all those who labor at the History Commons project, which has continued to provide a sound historical timeline available to everyone who carries out research on the events of the fall of 2001. Diana Collier, Editorial Director of Clarity Press, has been a calm, sure guide, as well as an intellectual companion, throughout the process of expansion and revision of this manuscript. ...