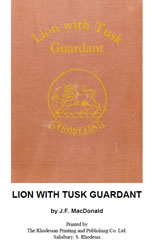 Foreword By the Hon. Sir Godfrey Huggins, K.C.M.G., C.H., Prime Minister of Southern Rhodesia. IT IS with pleasure that I recommend to the attention of Rhodesians, in the year of victory in the west, an account of what has been done by the men of this Colony to bring to a successful issue hostilities upon the soil of Africa. It is not so long ago that the Government of Southern Rhodesia was considering matters of vital policy, what this country could contribute to fend off from its borders a preponderant and boastful enemy. I am glad to recommend to the reading public this story of victory in Africa; for things might have turned out so very differently. Only by magnifying many times over the effort made by Southern Rhodesians which is described in these pages, can we obtain a clear picture of how much courage and determination it took to bring about the longed-for issue, by which the British people have again saved for humanity the causes of democratic freedom and individual liberty. Had the faith been less, the spirit smaller, we should now have little reason to rejoice. As we read of the hardships suffered by our men, of the loneliness, the thirst, the danger, we are grateful to these young warriors who through privation brought us this victory. We realise, too, that many who turn these pages will do so with sadness. No price was too great to pay; but these people, by the loss of husband, sweetheart, son and father, or it may be of youth and health, have done the paying. We give them a tribute of feeling which we translate wherever possible into action. Even if we can in no way pay the debt directly, we can do so indirectly by using mind and imagination to promote the wise direction of national and international affairs in future. The future is ours through that price paid, and it is our part to ensure its quality and not to allow the potentialities of victory by lethargy to be frittered away. So I commend this book to the Rhodesians of to-morrow. Many of them are returning from active fronts to begin their mature life in the ways of peace. They joined the ranks from school, and so know little of civilian responsibilities and the economic routine. These they will learn. And it may be that years hence they will feel a thank- fulness to have known long ago and at the very beginning, something of the great world, and of the fundamental sources of human action, human bravery. It must give them a background that the rest may envy, to have faced death and won through from immense perils to the joys that safe people too often take for granted, the joys of fresh air, of food when one is hungry, of one's own family and one's own fireside. They will not underrate, when they contrast this place with the older countries they have seen upon their travels, the peculiar characteristics of Rhodesia, its width, its kindly sunlight, and its friendliness. This book records a portion of their great adventure, by which we are the gainers, and for which, in the name of Rhodesia, we thank them. ...