« Lönnrot Elias - The Kalevala - Martin E. - Is judaism the religion of Moses ? »

Macleod Wayne - The essence and decadence of civilization 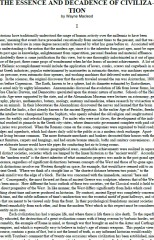 Historians have traditionally understood the range of human activity over the millennia to have been 'linear,' meaning that events have proceeded causationally from ancient times to the present, and that we of the modern world are in some degree necessarily influenced by what has gone before us. Associated with this understanding is the notion that the modern age, since it is the inheritor from past ages, must be superior to past ages in knowledge, enlightenment from superstition, personal freedom and material affluence. Undoubtedly there is some justification for this view, but to one thoroughly indoctrinated in it out of ignorance of the past, there come gasps of wonderment when he/she learns of ancient achievements. A list of just Hellenic accomplishment would include the application of levers, cranks, screws and cogwheels in ancient Greek industries, popular entertainment by marionettes in automatic theatres, war machines operated by air pressure, even automatic door openers, and washing machines that delivered water and mineral soap. In the sciences, the original discoverer that the earth traveled around the sun was Aristarchus, 1800 years before Copernicus. The Earth, known to be a sphere, had its diameter estimated by Eratosthenes, who erred only by eighty kilometers. Anaxomandes discussed the evolution of life from lower forms, long before Charles Darwin, and Democritus speculated upon the atomic nature of matter. Schools of the Hellenistic Age were supported by the state, and at the Alexandrian Museum were lectures on astronomy, geography, physics, mathematics, botany, zoology, anatomy and medicine, where research by vivisection was done on animals. In their laboratories the Alexandrians discovered the nerves and learned that the brain controlled the limbs, a fact already known to the ancient Egyptians. In the earlier Age of Pericles, freedom of the intellect was championed by the Sophists, who openly rebuked the old religion and sought natural causes for earthly and celestial happenings. For males who were not slaves, the development of the individual reached its pinnacle in the Greek city-states, where democratic government complete with paid citizen juries was practiced. When the Romans came on the scene, companies were organized to build roads, bridges and aqueducts, which had shares daily sold to the public as in a modern stock exchange. Apartment living became common. The more fortunate merchants and bankers decorated their houses with the finest furniture, carpets and hangings, and had ornate bronze utensils, baths and sanitary conveniences. A more elaborate house would have tile pipes for conducting hot air to living rooms. Time and again, in various geographical areas, remarkable achievements were realized in separate and distinct societies, societies which are lumped by the linear historian as the "ancient world". Accordingly, the "modern world" is the direct inheritor of what anomalous progress was made in the past grand age of ignorance, regardless of significant distinctions between concepts of the West and those of by-gone ages. Such distinctions involve our Western thought on space, for example, that would have seemed odd to an ancient Greek. Where we think of a straight line as "the shortest distance between two points," to the Greek mind it was the edge of a block. He/she was concerned with the immediate, sensual "here and now". Consequently, the most favored art form of ancient Greece was sculpture, whereas that of the West has been music. How different the basic outlook of these two societies, yet the Classical world is held to be the direct progenitor of the West. In like manner, the West differs significantly from India which cared nothing about time and never produced an historian. By contrast, ancient Egypt was completely concerned with time, and the subtle influence of time's unidirection was the essential motif of giant hallways, and statues that are meant to be viewed only from the front. In their psychological foundations ancient societies differed remarkably from each other, and from the modern West which in this respect must be considered an entity on its own. ...

« Lönnrot Elias - The Kalevala - Martin E. - Is judaism the religion of Moses ? »