Mallory James Patrick - In search of the Indo-Europeans 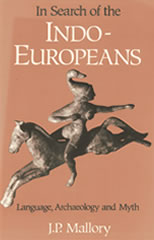 Foreword. By the first century AD historical records reveal peoples settled from the shores of the Atlantic to India all speaking languages closely related to one another. These are the Indo-European languages whose origins can be traced back to a common ancestor that was spoken in Eurasia some 6,ooo years ago. We call the people who spoke this ancestral language the Indo-Europeans or Proto-IndoEuropeans. But although we can give them a name, they are unlike almost any other ancient people we are likely to encounter. As the linguistic ancestors of nearly halfthis planet's population they are one of the most important entities in the prehistoric record - and yet they are also one of the most elusive. No ProtoIndo- European text exists; their physical remains and material culture cannot be identified without extensive argument; and their geographical location has been the subject of a century and a half of intense yet inconclusive debate. To attempt to survey the origins of all the different Indo-Europeans and then track each of them to their original homeland and discuss their common culture is a task to daunt any single writer and certainly outrun the competence of any single scholar. Out in the academic world neither of these problems has ever been a serious deterrent, and in the past century there have been at least seventy volumes published as general surveys of the Indo-Europeans and their origins. Yet, other than sporadic attempts to resolve the problem of IndoEuropean origins with cursory reference to the different Indo-European peoples, there has not been a full general survey of the Indo-Europeans in English for at least a half century. This has encouraged me to produce this volume to fill the gap. ...