Marchetti Victor - The CIA and the cult of intelligence 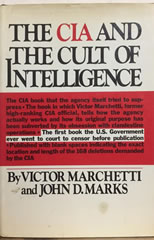 The CIA book that the agency itself tried to suppress. The book in which Victor Marchetti, former high-ranking CIA official, tells how the agency actually works and how its original purpose has been subverted by its obsession with clandestine operations. The first book the U.S. government ever went to court to censor before publication. Published with blank spaces indicating the exact location and length of the 168 deletions demanded by the CIA. ...