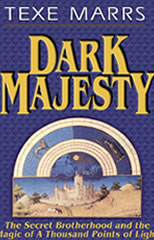 Author : Marrs Texe
Title : Dark majesty The secret brotherhood and the magic of a thousand points of light
Year : 2004

Preface. Is there behind the scenes an Illuminati, a secret clique of wealthy men masterminding a massive conspiracy to rule the world ? Are these powerful and influential men behind the frenzied campaign for World Government and a New International Economic Order ? If such a hidden group of elitists and occultists does exist, will their carefully contrived plot succeed ? As unlikely as it may seem, the astonishing answer is yes, there is a secret organization of illuminized men that exists. It is the Money Power of America, Europe, and Asia. I call the men who lead it the Secret Brotherhood. The members of this clandestine group believe themselves to be men of a superior race and bloodline. They are convinced that their destiny is to be served. We are to become their economic slaves. Over the centuries, these diabolical men, agents of a magical underworld known to only a few, have banded together in secret societies, amassing untold wealth and material treasures. But because greed is never satiated, their hungry appetite for more and more money - and for more and more absolute, unchallenged power - grows daily. Frankly, during the first 42 years or so of my life, I did not believe that such a group of men existed. I found the conspiracy "theory" of history somewhat amusing, if not absurd. When I encountered otherwise highly intelligent people who seemed to be consumed by notions of a hidden conspiracy of international bankers bent on ruling the world, I typically put them in the category of being either bizarre eccentrics or, quite possibly, nuts and overly bright wackos. "Surely," I thought, "their research and findings must be marred and their conclusions defective. The world simply can't be organized that way!" ...