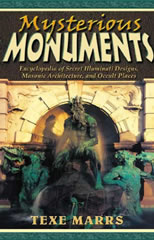 Introduction. Architectural Colossus of the Illuminati. Architecture remained a chosen instrument for the perpetuation of the Grand Design-the building of the perfect world. -Manly P. Hall, 33º The Secret Destiny of America Architecture is prophecy…Architecture is destiny…Prophetic destiny! That is the soul-stirring discovery the reader finds revealed in the pages of Mysterious Monuments. This is no ordinary book. But then, the incredible secrets it unveils are not easily comprehended by ordinary men and women. The stunning realization that there is, in fact, an arcane group of global conspirators, whose monumental works of architecture are intended to advance a terrible dark and mysterious ancient religion, is breathtaking, indeed. Who can believe it? Who wants to accept it? What I document here is a simple, yet profound-even shocking-truth. The annals of history prove that the greatest of empires is distinguished by its architecture and monuments. Babylon had its fabulous hanging gardens and its fabled Tower of Babel. The Pharaoic dynasties of Egypt to this day are memorialized by the Great Pyramid and the sun-ascendant obelisk. Greece is remembered for its astonishing marble and stone temples, statues, thrones, and altars built in honor of astrologically influenced gods and goddesses who traversed the heavens, were observed riding chariots in the starry skies and populated the depths of the chaotic seas and fiery underworld. Rome, too, adopted a pantheon of astrological deities and presences, and built the most beautiful architecture in their honor. ...