Marrs Texe - Voices from the dead 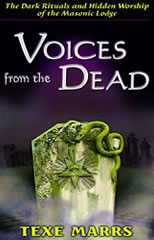 Author : Marrs Texe
Title : Voices from the dead The dark rituals and hidden worship of the masonic lodge
Year : 2018

Acknowledgements and introduction. “And so, whether we worship at the shrines and embrace the doctrines of Zoroaster or Mohammed or Confucius or Moses or Buddha or those of the Christian world, we know that there moves among us every day a timeless Force, greater and stronger than ourselves…” -Henry C. Clausen, 33º, Sovereign Grand Commander, (Supreme Mother Council, 1980), Emergence of the Mystical The above statement is typical of Masonry’s leaders. It indicates Freemasonry’s worship of a mysterious Force that exists in the world. This Force, says Masonry’s leaders, is neither Christian nor of another world faith. Its’ names are derived strictly from the Jewish Kabbalah and the ancient primitive religion prescribed in the rituals and ceremonies of Freemasonry. The worship of this Force predates Christianity and, claim the Masons, is able to make men divine gods. What is this Force? Is it of God or of Satan? Can we access the dead to answer these questions? That is the subject matter of this book. One Masonic authority, quoted in this book, refers to this Force as the “Seething energies of Lucifer.” This, regrettably, represents the doctrine of Freemasonry. We will closely examine this ungodly doctrine in these pages, but I wish to declare now, up front, that Masonry is far off the mark in it’s strange philosophy. I believe that, for Christians, it is only necessary to keep in mind these two important Scriptures when gauging the truth and untruth found in Freemasonry. 1. Jesus our Lord stated: “I am the way, the truth, and the life: no man cometh unto the Father, but by me.” (John 14:6) 2. The Apostle Paul wrote: “That at the name of Jesus every knee should bow, of things in heaven, and things in earth, and things under the earth; And that every tongue should confess that Jesus Christ is Lord, to the glory of God the Father.” (Philippians 2:10,11) Freemasonry adamantly opposes both these scriptural truths. Both are at the very foundation of true Christianity. Thus we know that the Masonic Lodge is decidedly not of the Christian faith. ...