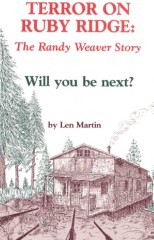 Author : Martin Len
Title : Terror on the Ruby ridge The Randy Weaver story Will you be next ?
Year : 1993

Introduction. Federal agents have invaded each of the 50 sovereign states that make up the union called "The United States of America." In doing so, they are violating the sovereignty of the states and infringing upon the rights of the citizens. Included in this army of federal agents are bands of prowling gun-slingers. Occasionally, they go too far in carrying out their acts of oppression and it ends up in a fiasco. One of those recent federally-created messes occurred in Idaho on August 21, 1992, when a U.S. Marshal killed a 14-year old boy. This act, and the killing of his mother the next day, can rightfully be termed "murder." These acts necessitated further acts of oppression and aggression in order to cover up the original crimes and try to throw blame on the real victims. It is this type of invasion into state matters via federal agents that is undermining the strength of our country. ...