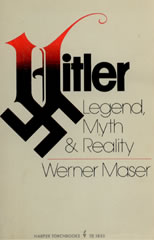 Preface. Books on the subjectofAdolf Hitler are legion. As much as a decade ago somefifty thousand serious studies of the Second World War had already been published. Yet there have been comparatively few actual biographies. Too much in Hitler's life has hitherto been regarded as unascertained or unascertainable.His biographers have, according to taste, either passed over in silence important stretches of his career, or have used their imagination to fill in the gaps and contented themselves with placing new interpretations and different emphases on already familiar details. Neither the documents in the Federal Archives at Coblenz nor the other Hitleriana to which most authors have had recourse can supply what is missing.Othersources very seldom come to light. Some were believedto beinaccessiblief not actually lost - as, for instance,the completetextofthe depositions made by Hitler's medical advisers, which is not to befound in any archive. Former members of his entourageremained silent - often with good reason - as did his sister, his half-brother and halfsister, his cousinsand his nephews and nieces, all of whom were in a position to help the historian.The publication of my books Die Fr\303\274hgeschichte der NSDAP, Hitlers Weg bis 1924 (1965) and Hitlers Mein Kampf (1966) was to open up a veritable goldmine of information.Important witnesses came forward - school-fellowsch,ildhood and army friends, comrades from the days of political struggle, opponents and enemies, relations and heirs. In the attic of one of Hitler's cousins I discovered,neglectedand forgotten, some of the material whichbiographershad been seeking in vain for closeon half a century. For the first time large numbers of letters and notes in Hitler'sown hand have been made available for study, as have the depositions and statements made by his doctors. ...