Mattogno Carlo - Inside the gas chambers 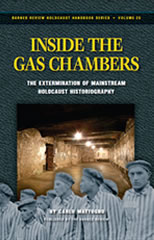 Since the early 1990s, critical historians have published a steadily growing number of carefully investigated studies on the so-called “Holocaust.” Hence the orthodox historians, usually paid by the government, were compelled to do something against the rising tide of Revisionist arguments. Therefore, after a conference had been held in Germany to discuss the matter, an anthology appeared in early 2011 under the aegis of the German historians GuenterMorsch and Bertrand Perz. It claims to refute the arguments of Revisionists. Indicative of this study is, however, that Revisionist arguments are basically ignored. Hardly any of the many Revisionist works which have appeared over the past 20 years is evenmentioned. In Inside the Gas Chambers, Italian scholar Carlo Mattogno mercilessly exposes the embarrassing superficiality and dogmatic ignorance of these historians. Over and over again it becomes clear that their claims are in part utterly unfounded or are frequently based on the distorted and disfigured use of sources. Based on his unparalleled knowledge of the sourcematerial,Mattogno aptly reduces the theses of the court historians to absurdity. By means of this book,mainstreamholocaust historiography has suffered a defeat which comes close to its intellectual extermination—literally every alleged “homicidal gas chamber” is shown to be a fraud! Softcover, 267 pages, B&W illustrations, bibliography, #686, $25 minus 10% for TBR subscribers. See more holocaust reference books by browsing through our online shop at www.barnesreview.com. ...