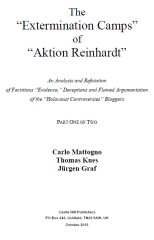 Introduction: The Dragon Slayers By Jürgen Graf 1. Dr. James Smith’s Plight On October 7, 2010, The Jewish Chronicle Online reported the following: “Holocaust Denial is slowly becoming a thing of the past, according to a leading authority who claims there are only three or four ‘pure denial experts’ left. Dr. Nicholas Terry, founder of the anti-denial blog HC (Holocaust Controversies), told a Leicester University conference that denial these days has ‘great brand recognition, but almost zero costumers’. Dr. Nicholas Terry, a historian at Exeter University, said: ‘My assessment is that there have been around 100 authors since the 1940’s who have written what can be considered pure denial books or pamphlets. Most of these experts are now either dead or inactive. It’s down to only three or four authors who are capable of writing such books.’ He said there are another 100 cheerleaders or propagandists who talk down the Holocaust, but without contributing original ideas. These include Iranian President Mahmoud Ahmadinejad and 500 ‘footsoldiers’ who are active online.’ … But Dr. James Smith, chairman of the Beth Shalom Holocaust Centre, warned of the continuing danger: ‘The problem is, even after professional Holocaust deniers have died, their published material remains in circulation, is available on the Internet and remains as pernicious and dangerous as ever,’ he added.” Dr. Nicholas Terry’s estimate that there have been about one hundred authors since the 1940s who have written revisionist books or pamphlets is realistic; I arrived at a very similar figure a couple of years ago. However, these one hundred or so revisionist writers were, and are, apparently so dangerous – not only for official historiography but for the whole “democratic” system of the “free world” – that many Western countries have adopted thought crime laws which make Holocaust revisionism a criminal offence and stifle all free debate about the extent of the persecution of the Jews during the Second World War. It goes without saying that these totalitarian laws flagrantly violate the constitutions of the respective countries and unmask their political leaders, who incessantly proclaim their commitment to “freedom” and “human rights,” as shameless hypocrites. Anti-revisionist repression is especially ferocious in Austria and in the Federal Republic of Germany where in some cases revisionists have been sentenced to many years in prison. Better evidence is hardly needed to prove that the official version of the fate of the Jews during the Second World War is rotten to the core. The adherents of the orthodox Holocaust story regularly compare revisionists to those who think that the earth is flat. Such people do indeed exist; they even have their own organization, the Flat Earth Society, and their own website. But interestingly enough, nobody bothers the Flat Earthers. The political and scientific establishment refuses to pay any attention to them; not in their wildest dreams would our politicians envisage promulgating anti-constitutional laws in order to silence them. No Dr. James Smith from a Beth Shalom Holocaust Centre castigates their published material as “pernicious and dangerous.” After all, the Flat Earthers have no chance of winning: Any competent astronomer could easily trounce them in an open debate. ...