« Mattogno Carlo - The cremation furnaces of - Sanning Walter N. - The dissolution of Eastern » 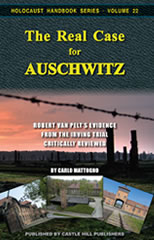 Editors’ Prologue. When faced with demands by Congressman Ron Paul to bring our (the U.S.’s) troops home from the various wars the United States are currently waging, Senator John McCain stated during a CNN Republican Debate on Nov. 28, 2007: 1 “I just want to also say that Congressman Paul, I have heard him now in many debates talking about bringing our troops home and about the war in Iraq and how it’s failed, and I want to tell you that that kind of isolationism, Sir, is what caused World War II. We allowed Hitler to come to power with that kind of attitude of isolationism and peace.” Of course, the real reasons for World War II can be found in the way the world ended World War I and how it treated democratic Germany between 1919 and 1933. The war was ended with the promise of free trade, ethnic self-determination, and disarmament for all – U.S. President Wilson’s famous Fourteen Points. 2 Yet what followed was a 15 year lasting occupation, subjugation, plundering, humiliation, and forced one-sided disarmament of Germany and Austria only, whose people were denied any attempt at self-determination, frequently by use of force. What the world had been denying peaceful democratic Germany during all those years, it then conceded to National Socialism under Hitler, who had learned that the world would give Germany what was rightfully hers (and later more than that) only under the threat of violence. That is not the point we want to make here, though. If we look into the war propaganda put forth by the U.S. before and during the wars against Serbia in 1999 and against Iraq in 1991 and 2003, plus when we look into how certain lobby groups have been pushing for a war against Iran over the past three years or so, we can see a pattern: Slobodan Milosevic, in 1999 leader of tiny Serbia, as well as Saddam Hussein and now Mahmoud Ahmadinejad are compared with – Adolf Hitler. ...

« Mattogno Carlo - The cremation furnaces of - Sanning Walter N. - The dissolution of Eastern »