McCabe Joseph - A history of the Popes 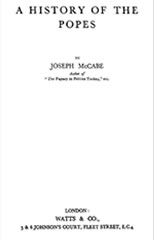 Preface. HISTORY will pass a severe verdict upon this generation of ours. At a time when science and a more humane sentiment have given the race a vision of a nobler order of life we have reverted to the brutalities of the Middle Ages, and we seem to contemplate with almost callous indifference a growing acreage of misery. In his analysis of this situation the historian of the future will reflect with particular fdisddm upon the moral apostasy of two of our oldest and most pretentious religions. For even in some of its foulest excesses this debasement of our public life is encouraged by the Buddhist and the Roman Catholic clergy. Some bold apologist may plead in extenuation of the guilt of the Buddhist priests and monks who have prostituted their influence in Japan that they were themselves infected by the inflammatory patriotism with which statesmen once more, as they did in an age of ignorance, prepare their people for criminal aggression. For the Roman hierarchy there is not even this pretext of an excuse. ...