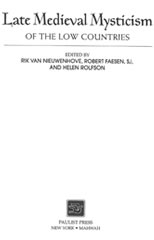 General introduction. The spiritual tradition of the Low Countries, mostly written in Dutch (or Flemish, which is the same language as spoken in Flanders, the northern part of present-day Belgium), must rank, together with the German School, as the most important vernacular tradition in Late Medieval and Early Modern Europe. Names like Hadewijch, Beatrice of Nazareth, and Jan van Ruusbroec immediately come to mind. While the works of the aforementioned authors are increasingly known outside the world of scholars active in Flanders and Holland, if only through English translations now widely available, the same cannot be said of the authors included in the present book. None of the works included here has ever been translated into English, and some of the writings included have never been translated into any modern language (including modern Dutch); indeed, some have never been published at all but exist only in manuscript form. ...