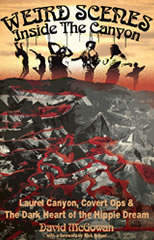 Foreword by Nick Bryant. Oscar Wilde said of art, “Those who go beneath the surface do so at their peril.” And author David McGowan has found that Wilde’s quote is quite prophetic for the rock’n’roll scene that thrived in Laurel Canyon in the 1960s and 1970s. Weird Scenes Inside the Canyon is McGowan taking a hammer to the icons and mythologies of 1960s counterculture, reducing them to dust, swept away by gusts of pomp, pretense, and even deceit. McGowan though isn’t wielding his hammer with the zeal of an establishment conformist or neocon, but rather in the same forlorn spirit as Nietzsche declaring that “God is dead.” As a homegrown product of Los Angeles with an encyclopedic knowledge of the southern California rock scene, McGowan appears to be essentially declaring that the gods of his youth are dead. Laurel Canyon was the fountainhead for the peace, love, and brown rice vibes that overflowed America’s airwaves as the Vietnam War raged, but lurking beneath its tie-dyed and florid veneer was an exquisite darkness of drugs, unbridled debauchery, full-tilt depravity, and shocking carnage. When readers of this book are delivered to Laurel Canyon’s blood-drenched tapestry of murder and mayhem, they will have to decide whether or not those sinister synchronicities are uncanny coincidences, conspiracies—or perhaps a kaleidoscopic blending of both. ...